I need art in order to be inspired to write in it. Anyway, my lack of new posts during the past months haven’t been for such a profound reason as Guido’s, the lead character in Federico Fellini’s movie 8 ½ .

Since the first time I watched this film, I’ve watched it again lots of times. I really love it. Then I read a book that, for some funny reasons, reminded me of 8 ½ (1963). And that book was Nadja (1928) written by Andre Breton.

For me, the movie and the book are both about the same subject: Art inspiration, which seems to be represented in the form and the body of a woman.

So in this new post I will talk about Claudia as the representation of artistic inspiration and, at the same time, as a man’s imaginary object of desire through Federico Fellini’s movie 8 ½ .

This marvelous film is about the imagination and life of an artist. The movie shows the creative process that a successful filmmaker called Guido is going through while he is making a movie (the one meant to be his final one, his masterpiece). But he is suffering from a lack of inspiration because of his own life experience: there is something inside of him that is troubling him.

If we watch this original trailer, we will know that the movie is presented as “The story of a Man… his imagination and the women who are wickedly a part of it”. So yes! the internal conflict producing him a lack of inspiration in his artwork is because of his vital experience with women.

Men! We women are so wicked, always driving you crazy… Sorry (not sorry) for that.

First impressions are always dangerous. Filmed in the 60ties, the movie gets into the art flow that was running to its own self-reference.

8 ½ is a film about making a film. It is about Art itself. Everything Guido says about the film he is making turns out to be true of 8 ½. The film that is being made in 8 ½ is Fellini’s 8 ½ itself. But let me add: in a very Surrealist way: Dali, Picasso, Miro and Magritte were still alive and working in those years. Breton would die four years after the making of 8 ½. In my opinion, I found the movie very deeply rooted in Surrealism.

Dream and fantasy are expressed in many scenes. But the one that interests me, in this case, is the one of Guido’s Harem, full of all the women that have been in his life:

Guido needs to find a female character for his movie, but he hasn’t found her yet. That is the main reason why he is stuck.

In this scene, we are witnesses of what is obsessing him. In order to find a female character for his movie, he relies on his memory to find what he needs: the perfect inspiration for the woman he is looking for his movie.

From his own mother, to that prostitute from his childhood, and that stewardess with that appealing voice, and the black woman of his own dreams, to his actual lover and his own wife.

He chases, like a hunter, for a female inspiration among all the women he “has had” in his life and “have been captured” in his mind. Like a mental vicious circle, the artist’s lack of inspiration is a symptom that comes from being unable to control this internal conflict, which comes from his obsession with women.

But then, what happens with Claudia? 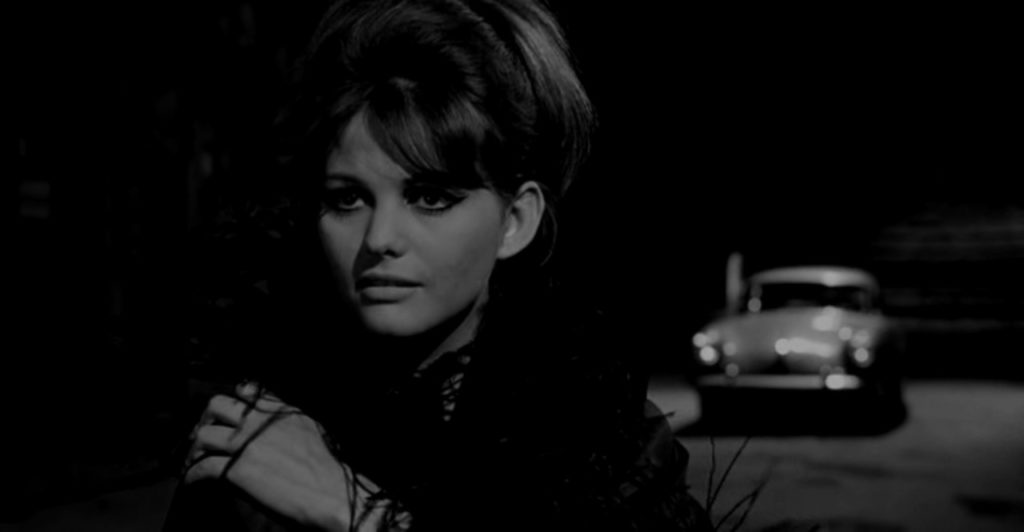 Claudia (Cardinale) appears for the first time at the beginning of Fellini’s movie, without knowing she would be Claudia in Guido’s.

Throughout the movie, Guido always asks to contact an actress called “Claudia” to take part in his film. He seems obsessed in finding her, but she never answers him back. He has her in his mind all the time and he even imagines how the movie would be with her in it. She never appears in the movie, although we know she is part of it, until the movie is ending.

For me, the most important and beautiful scene from 8 ½ is when Guido and Claudia finally meet:

Here, the meaning of Fellini’s movie is revealed. Guido, the artist, suddenly is visited by his muse while he is working: Effectively, the name Claudia is rooted in the Latin word ‘claudus’, meaning “light”.

So finally, he finds the woman he was looking for as his female character, which is the woman who gives the protagonist “the water that would save him from his doomed life”: This girl is beautiful…young and wise, a girl but at the same time a woman, authentic, bright. There’s no doubt that she will be his salvation.

Claudia is presented as the artist’s inspiration, as the muse the artist expects and evokes for creating his work. But at the same time she is an ideal, the illusionary female character he desires for the artists work, and for this reason she is not included in Guido’s harem because she is not a memory, she is his frustrated female aspiration.

As Guido says: the protagonist of his movie “doesn’t believe that a woman could change a man”… And maybe that is the reason for his obsession with women. He will never find the inspiration for his movie, because he lost his faith in life (and so in love), so there will not be any movie until he solves his inner conflicts.

But as Claudia says: “nel fondo e colpa sua” (deep down it’s his fault!) and not her, nor all the women in the artist life.

Error de RSS: DOMDocument not found, unable to use locator